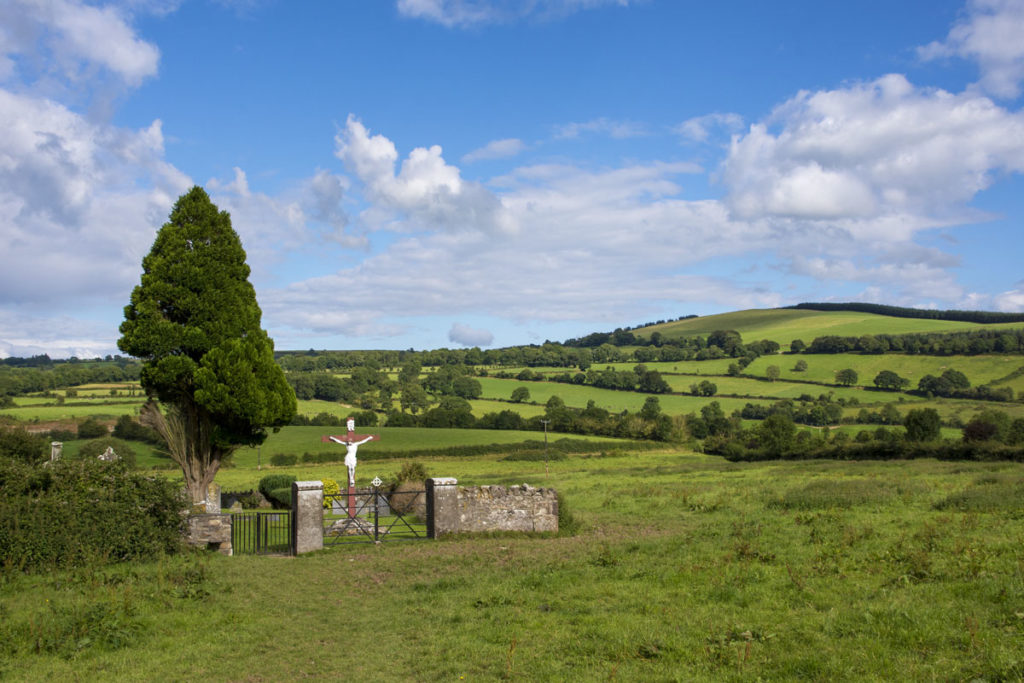 The view from the road Ahenny.

Two high crosses and the base of a third cross are situated in Kilclispin graveyard in Ahenny. The crosses are part of the Ossory group of High Crosses. Similar examples can be found nearby at Kilkieran and Killamery, both on the Kilkenny side of the Lingaun Valley. Replicas of High Crosses are on display in Kilkenny Medieval Mile Museum. The Ahenny Crosses stand over 3 meters high and are made of sand stone with intricately carved decoration. The North Cross has carving of Adam naming the animals. The South cross has depiction of a hunting scene, Daniel in the Lion’s Den and the Fall of Man. There is a variety of enganging folklore attached to the Crosses.

The two Ahenny  crosses are impressive, both about four meters tall and dating from the 8th century. They are somewhat unusual in that they’re almost exclusively covered in an interlacing design. Only on the bases are there any panels depicting the more typical religious scenes. They are said to represent the transition from the older abstract design of high crosses to the pictorial scenes found on later crosses. Another odd feature is the removable cap stones known as mitres (bishop’s hats).

On the base of the north cross is a panel depicting seven religious men. The story goes that these were seven bishops returning from Rome, each carrying a bag of sand as a momento of their visit. Robbers ambushed them and mistook their bags for purses. The robbers murdered them, convinced that the bishops had turned their gold into sand to save it from being stolen.

There is a base of a third cross still in the graveyard. This cross was supposedly the most beautiful of the three at Ahenny and rumor has it that it was stolen about 200 years ago. The story goes that the ship which was carrying the cross from Waterford was lost at sea off Passage East and the cross now lies somewhere on the sea floor.

The Ahenny High Crosses are very similar to the Kilkieran High Crosses which are only about three kilometers away.