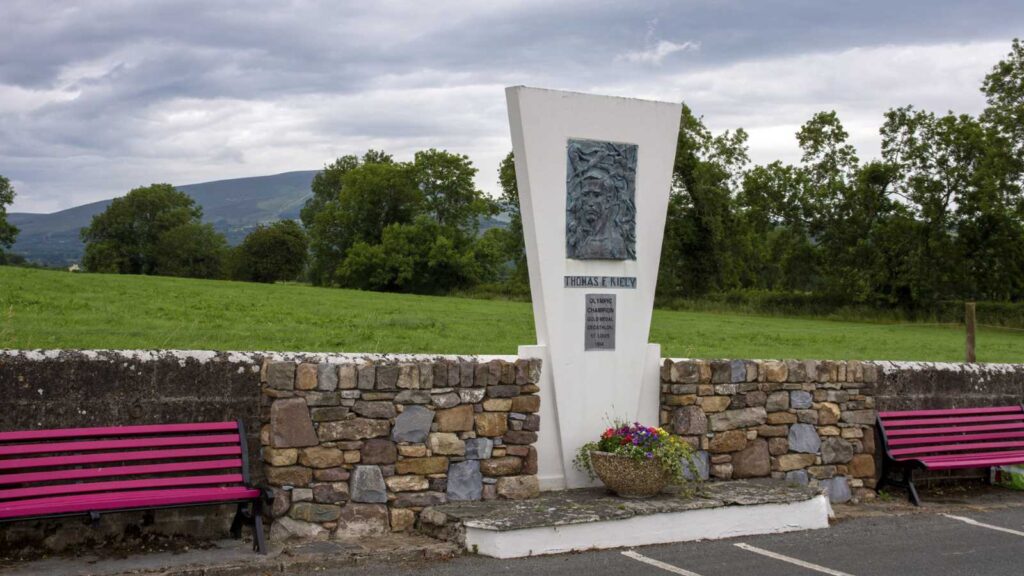 In Ballyneill Village there is a monument and an interpretive panel dedicated to Tom Kiely aka ‘the Champ Kiely’ (1869-1951). He was a native of the area and a noted athlete in the late nineteenth and early twentieth century. He had numerous world records and titles, but his crowning achievement was winning a gold medal […] 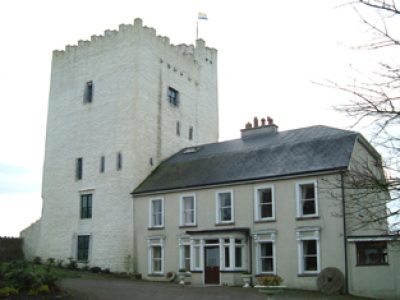 Tybroughney Castle is now a private residence. It was a very important trading post due to its position near the head of the tidal part of the river Suir. 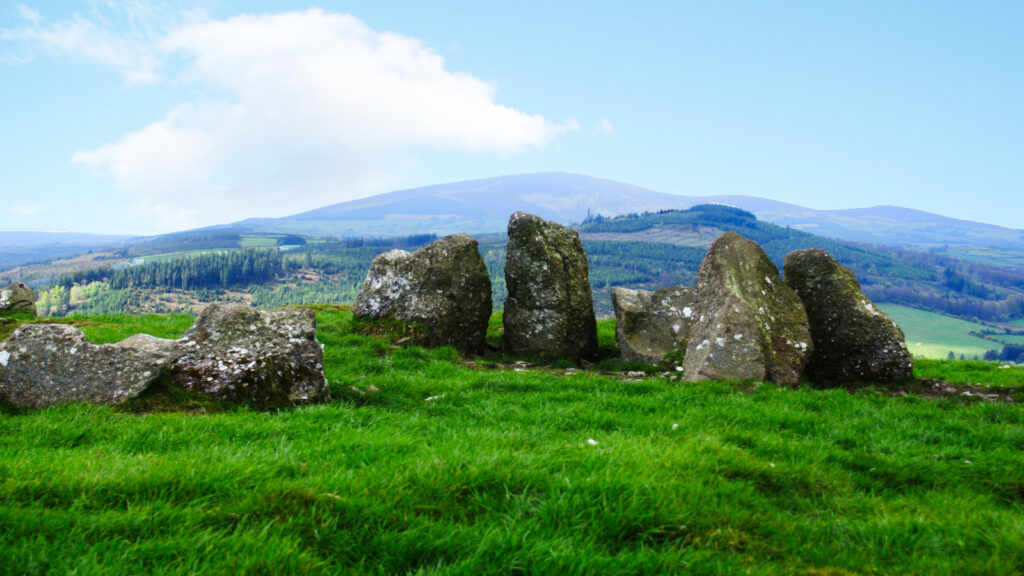 Overlooking Tullahought village from the summit of Bawnfree (900 ft.) is a circular enclosure of standing stones which date to the pre-historic era. Only the weathered remains are now visible and it can be viewed in the distance from the route of a National Walk from Tullahought village. The name Kilmacoliver derives from a later […] 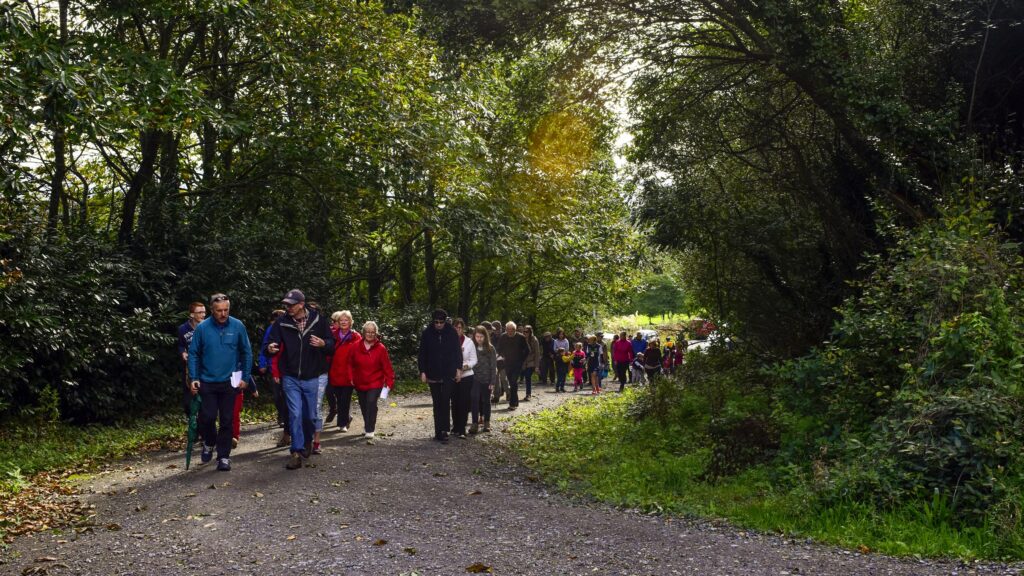 Carrigadoon Hill has a large well preserved hill fort on top dated from approx 1300 BC. This hill fort has commanding views of the surrounding countryside. There was a monster meeting on the top of Slievenamon on July 16, 1848 where 50,000 people were addressed by Thomas Francis Meagher and John Michell. People were angry […] 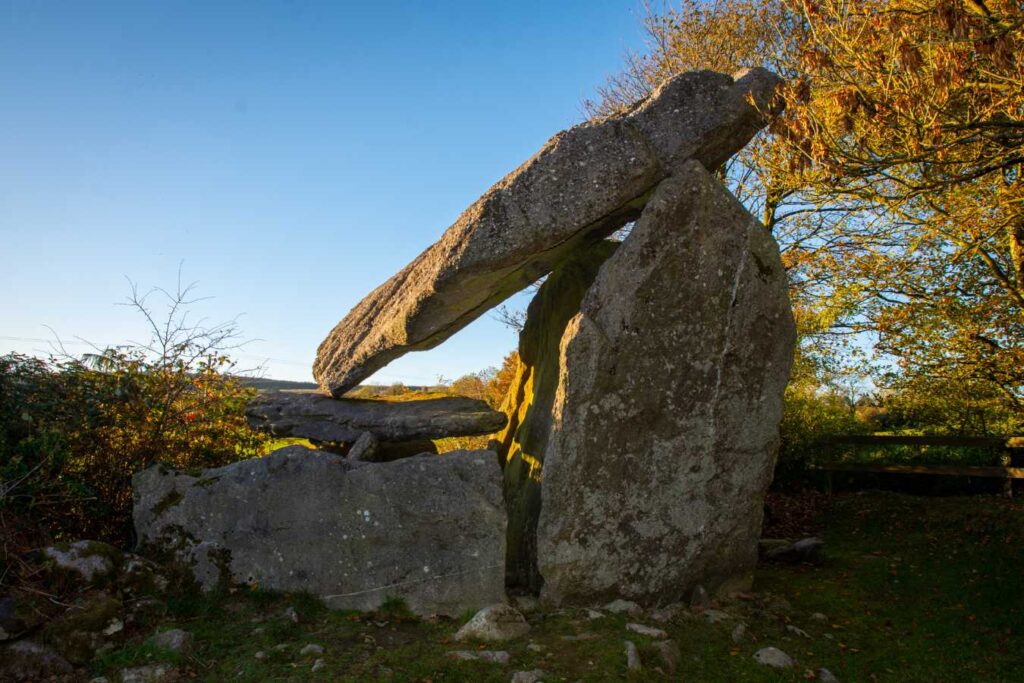 Harristown Dolmen or Kilmogue Portal Tomb is one of the tallest and most spectacular examples of a Portal Dolmen in Ireland. Known as ‘Leac An Scail’ – stone of the warrior hero, the portal tomb has been constructed using a large capstone on two portal stones and a pillow stone. The portal stones are approximately […] 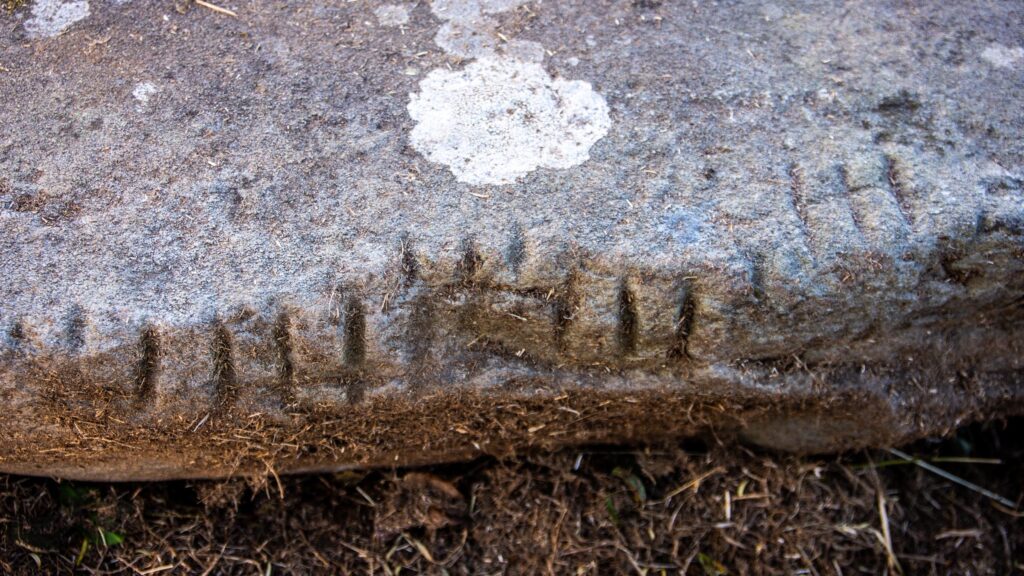 In 1891, 2 Ogham Stones discovered in now unused graveyard and are dated between 400-900 AD. 3 km from Windgap – both stones of greenish sandstone found in the local area. Ogham Stones are typically standing stone on which short marks are made in groups of between one or five notches, usually on the edge […] 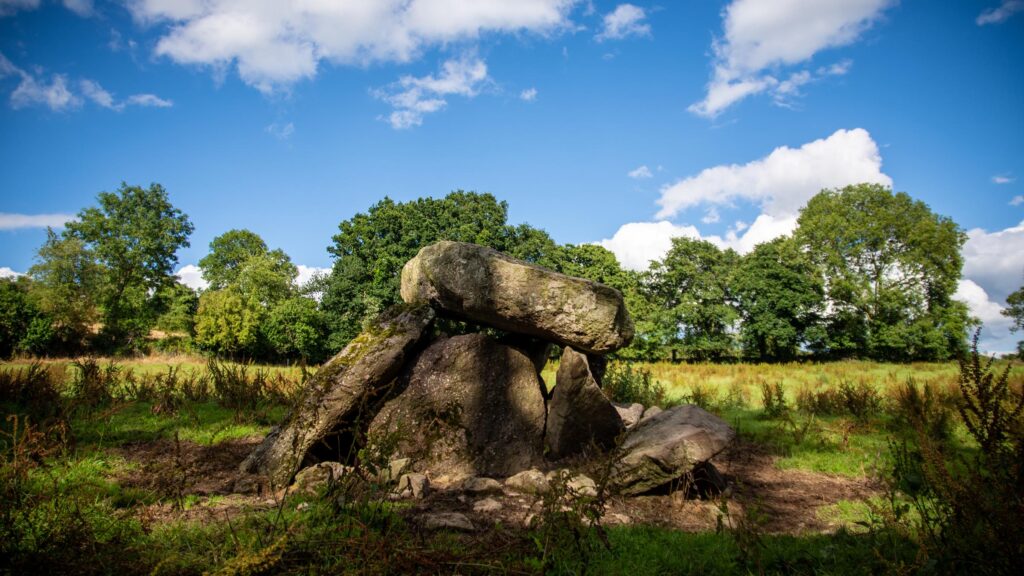 400 meters North East of the ruined 12th century Church in Owning Village is a Dolmen. This Dolmen has an impressive capstone and stands behind an 18th century mill, and was well known by the local population for its antiquity as ‘The Druids Altar’. Nearby are several spring wells. This Dolmen is one of a […] 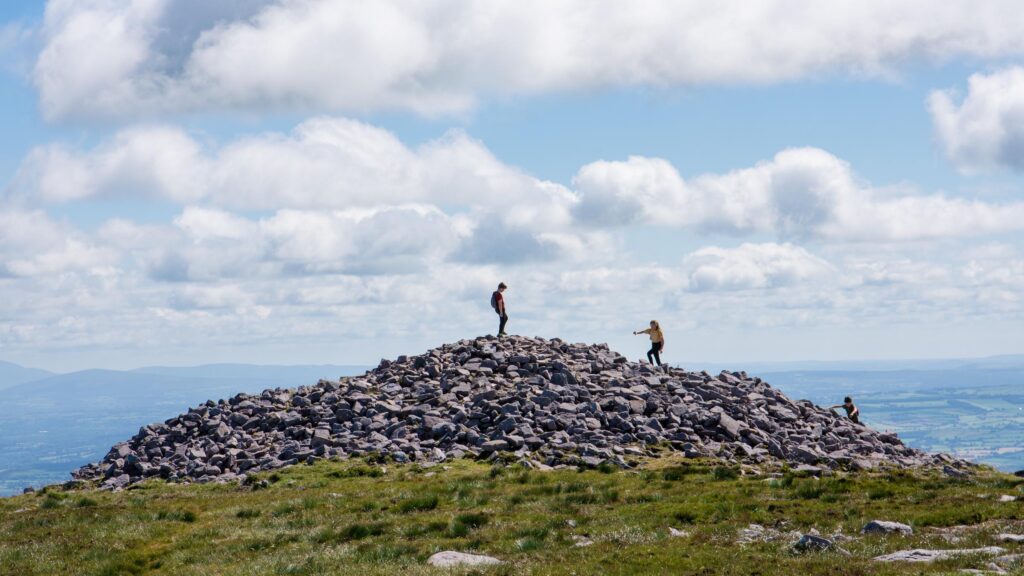 721 m (2,365 ft) high, Slievenamon provides a dramatic view from the top over the counties of Tipperary, Kilkenny and Waterford and the Lingaun and the Suir Valley. There are at least four pre-historic monuments on Slievenamon. On the summit is an ancient burial Cairn with a natural rocky outcrop on its East side forming […] 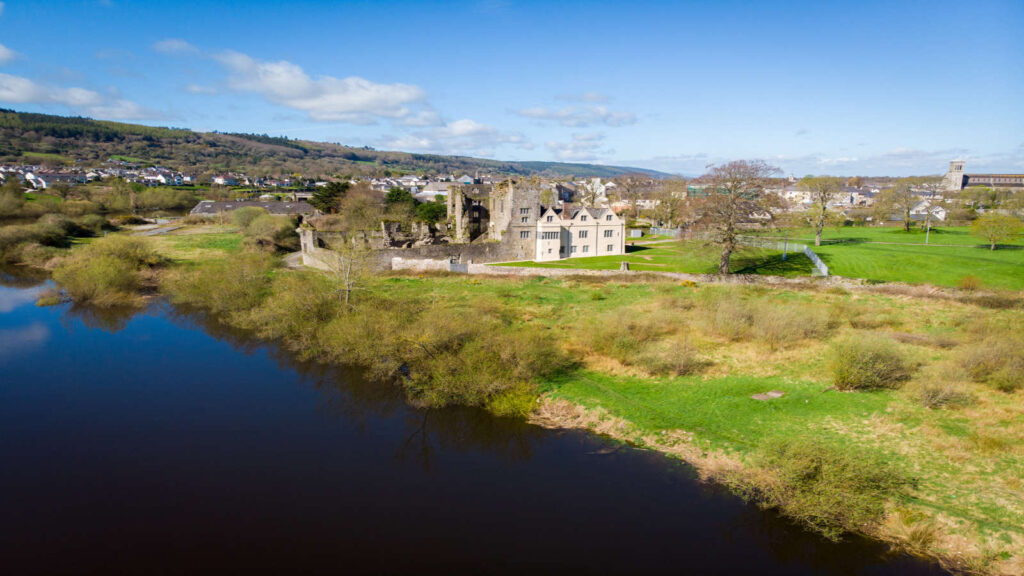 In 1242, Matthew Fitzgerald was granted a licence for  six-day fair at his ‘Manor of Karrick”. By the mid 14th century, the Butlers of Ormond had begun to focus on the trading importance of Carrick-on-Suir between Waterford and the Tipperary hinterland. In 1315, Edward II granted the manor to Edward Butler along with the title […] 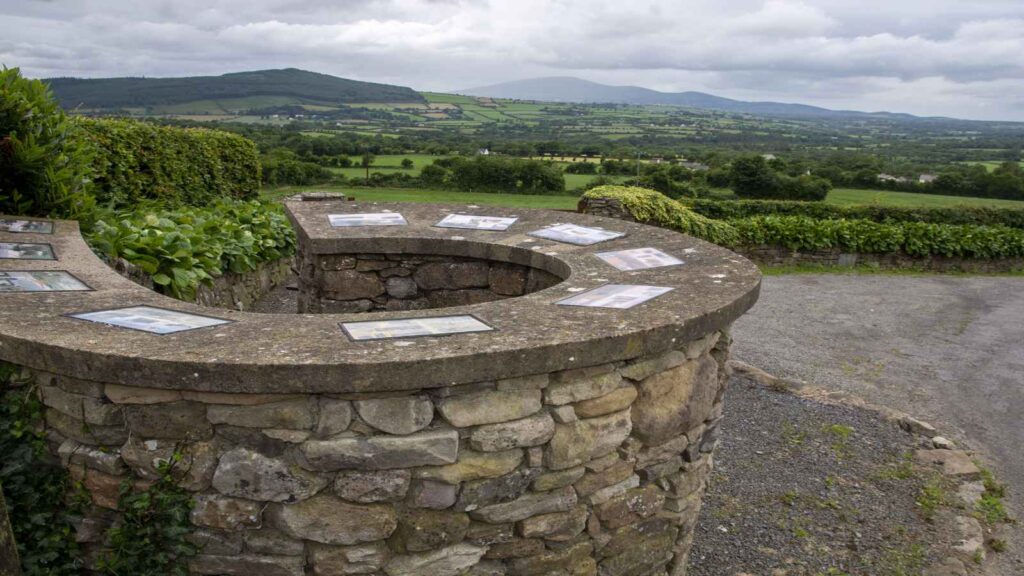 We are proudly sponsored & supported by:

We use cookies on our website to give you the most relevant experience by remembering your preferences and repeat visits. By clicking “Accept”, you consent to the use of ALL the cookies.
Cookie settingsACCEPT
Manage consent

This website uses cookies to improve your experience while you navigate through the website. Out of these, the cookies that are categorized as necessary are stored on your browser as they are essential for the working of basic functionalities of the website. We also use third-party cookies that help us analyze and understand how you use this website. These cookies will be stored in your browser only with your consent. You also have the option to opt-out of these cookies. But opting out of some of these cookies may affect your browsing experience.
Necessary Always Enabled
Necessary cookies are absolutely essential for the website to function properly. This category only includes cookies that ensures basic functionalities and security features of the website. These cookies do not store any personal information.
Non-necessary
Any cookies that may not be particularly necessary for the website to function and is used specifically to collect user personal data via analytics, ads, other embedded contents are termed as non-necessary cookies. It is mandatory to procure user consent prior to running these cookies on your website.
SAVE & ACCEPT